In Part 1 we saw how the Twitter hashtag #WeSeeYou has evolved since it first appeared on Black Twitter in 2009. Initially, #WeSeeYou was mostly a somewhat playful way of calling out another person's pretentious, hypocritical, or evasive behavior, such as sneaking a look at someone or denying a personal failing that was obvious to others. A decade later the hashtag is still used in that way, especially on Black Twitter, but by now has been taken up by a wide range of Twitter users to express different, sometimes contradictory meanings including condemnation, contempt, recognition, solidarity, gratitude, and sympathy.

Searching online for connections between #WeSeeYou and African American culture, I found that the phrase "we see you" (not just the hashtag) does seem to have some cultural resonance in fields ranging from popular music to religion. One connection that turned up and seemed especially promising as a potential source of cultural insight was sawubona--a Zulu (Southern African) social greeting term that translates as "we see you."

I've found very little about sawubona in English academic literature. The word appears in Google Books searches from the 1960s on, in Zulu language textbooks, tourist guides, and some ethnographic writings. Its occurrence in English has grown rapidly since the end of the South African apartheid regime in in the 1990s, as the following chart illustrates. 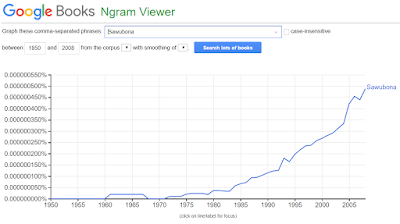 Lately, sawubona seems to have become something of a buzzword in commercial contexts, where it can serve as a branding device to associate an enterprise with authentic indigenous roots of Southern African culture. For example, the South African Airways in-flight magazine is Sawubona.

The image at the top of this post was taken from the blog of Roche Mamabolo, "an author, blogger, entrepreneur, mentor and most of all, a teacher" who runs an entrepreneurship consultancy in South Africa and Botswana. Mamabolo introduced the concept sawubono in a 2018 blog post:


Sawubona, is an ancient isiZulu greeting which means: We see you. It is equivalent to Hello and Namaste.

So when we meet and greet I would say “sawubona” [we see you], and you will respond by saying “yebo, sawubona” [yes, we see you too].

In Zulu tradition, the “I” is connection to an ancient lineage of ancestors which my ancestors are always with me.

So when I meet you, not only is myself meeting you, but my ancestors whom I’m representing meet you too.

Mamabolo goes on to explain that sawubona "is more than just a greeting, it also means: we see each other, we acknowledge each other, we recognize each other ... a deep witnessing and presence [that] invites us to communicate." Drawing a business lesson, he concludes: "as entrepreneurs, we need to not only greet our customers, but we need to acknowledge them, to recognise them, to witness them, their feelings, their aspirations."

Bridget Edwards, a South African psychological consultant and author, offers a similar explanation of sawubona, except she translates it as "I see you" (rather than "we see you") and derives a more self-focused lesson: "it is only when we actually ‘see’ ourselves and acknowledge our own inner greatness that we have the capacity to recognise this in another."

In the United States, sawubona has appeared in discussions of multicultural education and ethics of artificial intelligence as well as organizational leadership. Although some sources link sawubona to the larger theme of African Ubuntu philosophy, none that I have found explores that connection in any depth.

#Sawubona is also used as a Twitter hashtag, but (interestingly) almost never in conjunction with #WeSeeYou. I've found only four tweets with both hashtags, one of which is my own tweet announcing Part 1 of this article. The others relate to transgender rights (a movement that has understandably embraced #WeSeeYou) and to the "Sawubona Award" given by the Pan African Network, an organization that supports Pan African multicultural education. Here they are: 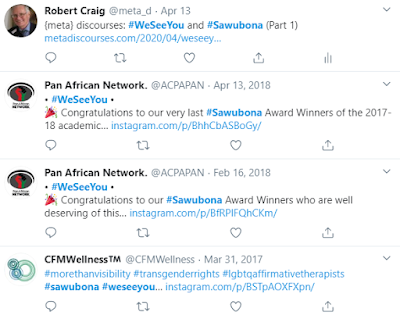 These tweets use #WeSeeYou in positive senses of recognition, celebration and solidarity. A larger number of tweets, but still only a few dozen, many of them from that same Pan African Network, combine #Sawubona with the phrase (not hashtag) "we see you." Most of those tweets are celebratory in a Black cultural context. Many more tweets use #Sawubona without #WeSeeYou or "we see you." They are quite various and hard to generalize about, but many of them come from South Africa and have a commercial reference, including popular music. Quite a few others come from a religious context of African or African American Christianity.

So, what can we conclude from all this? And so what ... why should we care?

Recall that this mini-investigation began out of curiosity about the hashtag #WeSeeYou, just because it seemed to have so many different meanings. A little sleuthing traced the hashtag to Black Twitter, where it was first used in 2009, and so I wondered how its origins might be connected to African American culture. The typically teasing, somewhat jocular tone of those earliest tweets might suggest some relation to traditions of verbal sparing in African American communities, but why "we see you?" Where did that phrase come from?

To that question I've found no definite answer. For a while I thought #Sawubona might be the key to a deep connection between #WeSeeYou and African traditions. That remains a possibility, and the connection (perhaps traceable through Ubuntu philosophy) may be obvious to cultural insiders or scholars better informed than I am, but I haven't found any academic literature on the question. In current usage, #Sawubona is closely related to positive senses of #WeSeeYou, such as recognition and solidarity, that have appeared on Twitter through the last decade, very unlike the unmasking of pretension and hypocrisy featured in the earliest uses of #WeSeeYou on Black Twitter. #Sawubona is a recent trend that partly has to do with South African national branding. Clearly, #WeSeeYou did not originate directly from #Sawubona.

This Christian sense of "we see you" as recognition and caring for others is pretty different from the early use of #WeSeeYou on Black Twitter, but it is quite possible for a culturally available expression to be taken up and used ironically in verbal play. Maybe that's where #WeSeeYou came from. That really is just a plausible guess, not a research finding, but I probably haven't emphasized enough how common the phrase "we see you" is in Christian discourses. The Christian connection is not a minor thread, and it also helps to explain other senses of #WeSeeYou that we observed on Twitter, senses like recognition, celebration, appreciation, solidarity, sympathy and support.

A search for the cultural origins of #WeSeeYou is not a search for its "true" or "correct" meaning in metadiscourse, because there is no such thing. Every common way of using #WeSeeYou is valid in the discourse communities that have adopted it for their own purposes, whether they be police supporters, right wing conspiracy theorists, or transgender activists. There is much more here to explore, if one is interested. For example, in the discourse of the #MeToo movement, #WeSeeYou is often paired with another hashtag, #WeBelieveYou, which adds another thread of meaning.

I think we should care about this, if only to better appreciate the creative richness of ordinary human culture and communication.